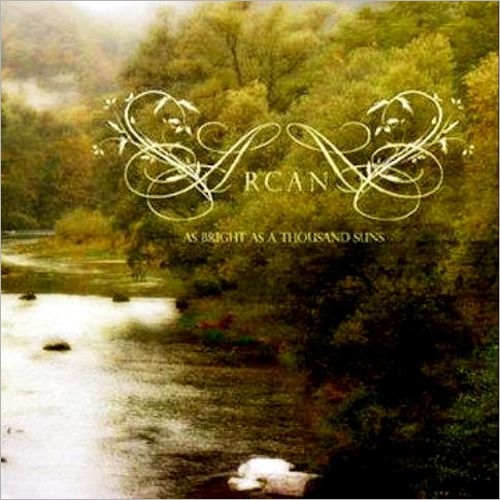 The Arcana band debuted in the mid-nineties with the incredible album “Dark Age of Reason”, which immediately captured the attention of critics worldwide thanks to depth and darkness of their songs, inspired by a romantic vision of the Middle Ages and imbued with a magical, ancestral suggestion.
Influenced by the sounds of Dead Can Dance, they found very soon a bright and original path of creativity and dark fascination.
Despite the total diversity of musical tones and sound, their creative process and the complexity of their music, which varies completely from album to album, appear to be inspired by the poetic and spiritual conception of the Popol Vuh of Florian Fricke, the Munich band, soundtracker of almost all the films of the great director Werner Herzog.
We had the opportunity to speak with the leader, founder and soul of the band, Peter Bjargo.

Slowcult: Arcana… deep musicality, great use of choral voices. Especially in the first albums, such as “Dark Age of Reason” the result is an austere sensation, a return to a gloomy Middle Ages, long long ago, when the spirit was pervaded by fear and anxiety. Do you recognize yourself in this stylistic choice, partly modified in the last production?

Peter Bjargo: I believe that our vocal parts are stronger and more parent than before. I guess that the fact that we where a bit shy about singing, at least I was, with the first two albums, which might have contributed positively to a more choir based sound. Also, I wanted more choirs at that time. Who knows thins might come back in future recordings.

Slowcult: Your music seems to evoke the solemnity of the Popol Vuh poetic. Their profound religiosity is matter of inspiration for your sound? What are your Popol Vuh favorite albums? Hosianna Mantra, third album of the German band, applied a sort of syncretism between Christian and Hindu religions: do you recognize yourself in these themes?

PB:Popol Vuh is probably the best band that ever existed, at least in my opinion. I can’t say that I’ve adapted their sound into Arcana’s, but their whole entity have inspired my profoundly. When it comes to best albums, this is really hard. I love “Agape – Agape”, I even tattooed this on my arm, and “Sei Still, Wisse ICH BIN”. I love, almost everything with Popol Vuh, it’s like a religious experience. Florian Fricke’s “Die Erde und Sind Eins” is absolutely incredible too.
I’ve always sort of felt connected to mantras. If you listen to, almost, any song I’ve done it’s always minimalistic and more or less stick to the same theme, or mantra. I believe this is the way to build up to a sort of ethereal experience. I do not, my self, try to imply any existing religion. If anything, I believe in the divine, inner self/god, which can only exist if you keep in balance with nature.

Slowcult: Autumn in particular seems to recall the typical lyric of the Lied: a song of solemn, austere, neoclassical beauty, infused of gothic-medieval influences. Have you been in touch with classical/renaissance Swedish or Scandinavian music?

I rarely find any Swedish classical composers that catches my attention. I think it’s more the scandinavian soul that made an imprint on me as a person, and on my music. And autumn have always triggered my creative side, it’s the duality of beauty of the decay of nature.

Slowcult: Is there a relationship between the Arcana poetics and the romantic literature? Are there any references that you consider essential? Are you akin to Byron, Shelley or Edgar Allan Poe?

PB:I’d say that perhaps Voltaire, Baudelaire or Strindberg have inspired me more. I rarely read anything else than non-fiction. Mainly books on Psychology, Philosophy, technical book on sound engineering or apparatus, Zen Buddhism

Slowcult: “The Last Embrace”: epic, obscure, ancestral, gothic, medieval. A pagan Inspiration ? A recover of ancient religiosity? It seems a continuation of the Popol Vuh poetic reviewed in a gothic style although your poetics seems more ancestral and gloomy, and even if tied to existential misery, is not completely nihilistic.

PB:Last Embrace is one of the few albums that actually is “angry” in nature. I went through a tough period in my life and with this came a negative view on the world. Some of it was a correct insight, but my focus was on negative things, which you can hear on this album. 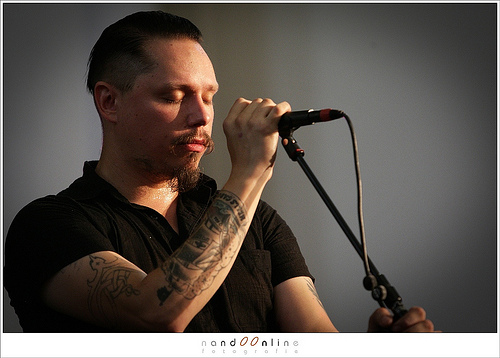 Slowcult: Why the need for ethnic folk sounds in “Serpent Rouge”? The album has its own originality but seems less inspired than the others.

PB: Serpent Rouge is the one album that got the most varied reviews of all my releases. Some people don’t understand it at all, and some people consider it being one of the better albums. For me “Serpent Rouge” was an experiment. To bring in more percussive interments and working with more meditative song structures. It’s hard for me to explain why you feel it’s less inspired than any other cd.

Slowcult: Your music strongly evokes movie images: we know that you have been working on a documentary, could you describe this work? Do you plan to repeat and deepen this kind of experience?

PB: My music have been included in several documentaries, which is really interesting for me. I think that this might be something that I’d love to do in the future. I think that when all these medias are combined, it gives a very strong impression and experience. However, it seems to be a jungle of bureaucracy and “know-the-right-people” involved, and I’m really bad at both of these skills.

Slowcult: We have several questions about your incredible, amazing and wonderful last creature “As Bright as a Thousand Suns”. We were lovely surprised by the title why did you choose it? Did you find the way for a sort of interior serenity? We found this album as characterized by a wide, eclectic, breathe, It seems pervaded by mystical-esoteric inspiration and a sort of pagan religiosity which transmits at the same time, a great sense of quietness. Are you fascinated by the esoteric and the gloomy side of life?
“As Bright as a Thousand Suns” is an album suggesting dream images: when we listen its tracks we can leave our mind travel over lakes and enchanted forests. Have you special places in the world that stimulate your creativity and imagination?
In the beautiful song Medea the instrumentation and use of feminine voices remember Mediterranean sounds: is this a sort of tribute to the classical Greek culture? The dreamy Inceptus seems to be inspired by the Eastern chants: is the oriental music a source of inspiration for you?

PB: At the time of writing this album I had to deal with a major depression at the same time, and my daughter was the only thing that kept me going so she was the thousand suns for me. Therefore the title.
I didn’t have any real agendas for this album, except for having a more natural sound and I wanted to give more place for Ann-Mari and Ia. This gloomy side you mentioned is probably a result from my depression, which would be impossible to hide if you’re honest with your music. All the imagery and inner worlds created by my, and any, music, is highly personal and it would be impossible for me explain other peoples experiences. I think that my creativity and musicality has been there since I was a child, which was carried on into adulthood. I think that the inner worlds we were able to build as children, are crucial to keep, otherwise it would be horrible to continue.

Interview by Magister and Dark Rider